The announcement of Yongnuo's new camera, the YN455, stroke my curiosity from the beginning, and the company must be commended for such a bold move. The YN455 is an interchangeable lens camera with a micro four-thirds (m43 hereafter) lens mount and sensor, but it runs Android 10, just like a smartphone. Unfortunately, the camera is only available on the Chinese market, and the present pandemic does not help global distribution either. That being said, being in China, I managed to get a hold of one camera and decided to test the aspects that interest me most.

Imagine a camera on which you can mount any high-quality m43 lens in front of a large m43 sensor, and couple that with modern computational photography techniques to obtain high-quality low-light, landscape, and portrait images... Wouldn't you obtain an unbeatable, compact all-rounder capable of anything?

Current techniques have proven well-advanced to stunningly extend dynamic range, reduce noise, and control depth-of field by virtue of combining multiple shots. Following that reasoning, if that potential can be attained, I would then only need to mount a sharp lens with a large zoom range (Panasonic Lumix G Vario 14-140mm F3.5-5.6 ASPH Power O.I.S - a mouthful) to be able to get almost any desired result.
Note: at the moment, I consider that super-resolution techniques are still immature (or conceptually simply not capable) for effectively extending the  focal length of zooms computationally with a qualitatively acceptable result. Thus, I believe an optical zoom is still needed.

Physical handling - a brick with buttons 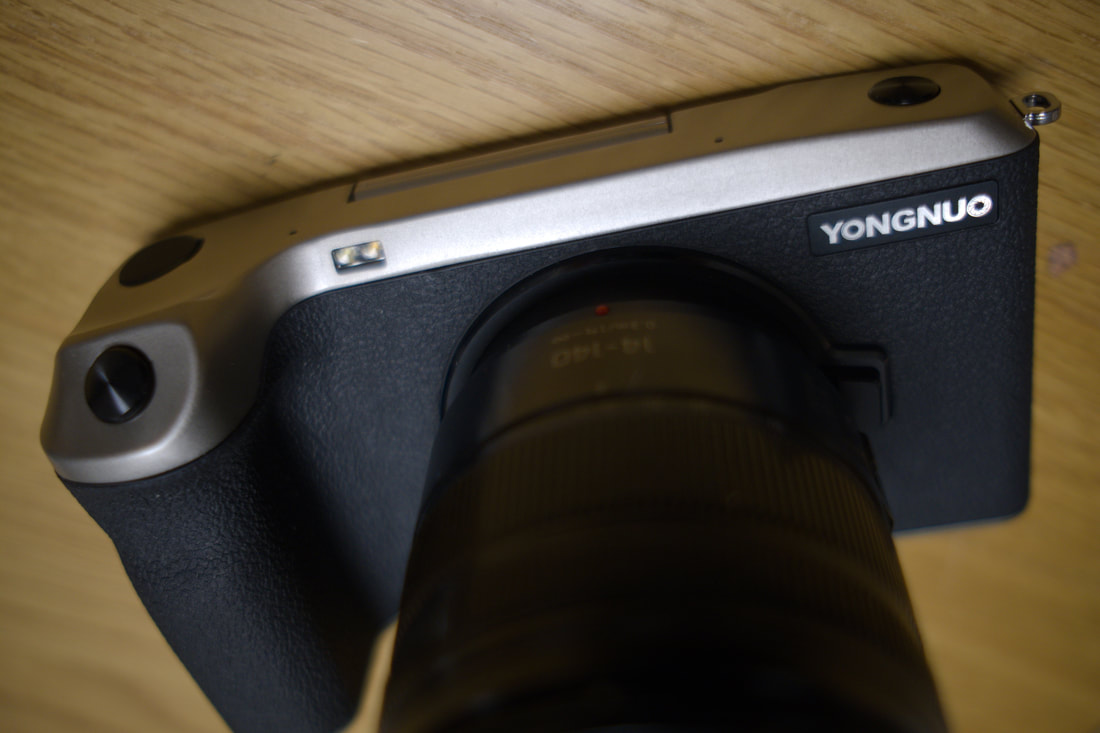 The YN455 is a chunky beast. My Fujifilm X-E3 - by no means a compact rangefinder for modern standards - feels dwarfed in comparison. The YN455 is heavy, but feels well-built and robust. The camera seems made of tough plastic, and the seams are tight. The grip is generously sized and shaped conveniently - a must-have with that weight. The faux-leather grip that goes around it also covers the front of the camera. The flaps used to protect the ports of the camera are well-fitting and thick enough, and the battery door is okay (the hinge and spring are a bit flimsy) but not waterproof. The battery is rated at 4400 mAh.

Interestingly, there are two USB-C ports: one on the bottom plate and one on the side. They are not protected by flaps, and one cannot be used for charging (so what's the point?). Next to the bottom one, there is a SIM card compartment that can be opened with the metal needle which you will find in the box. Apart from that, there is a nice surprise in that the camera offers both a headphone and a microphone 3.5 mm jack, as well as 64 GB internal storage. Below the audio ports, a TF card slot. The tripod mount is centered on the lens axis. The camera body itself, apart from the grip, is quite thin, and most of the thickness is taken up by the beefy, high-res LCD, mounted on a large hinge at the top of the camera. 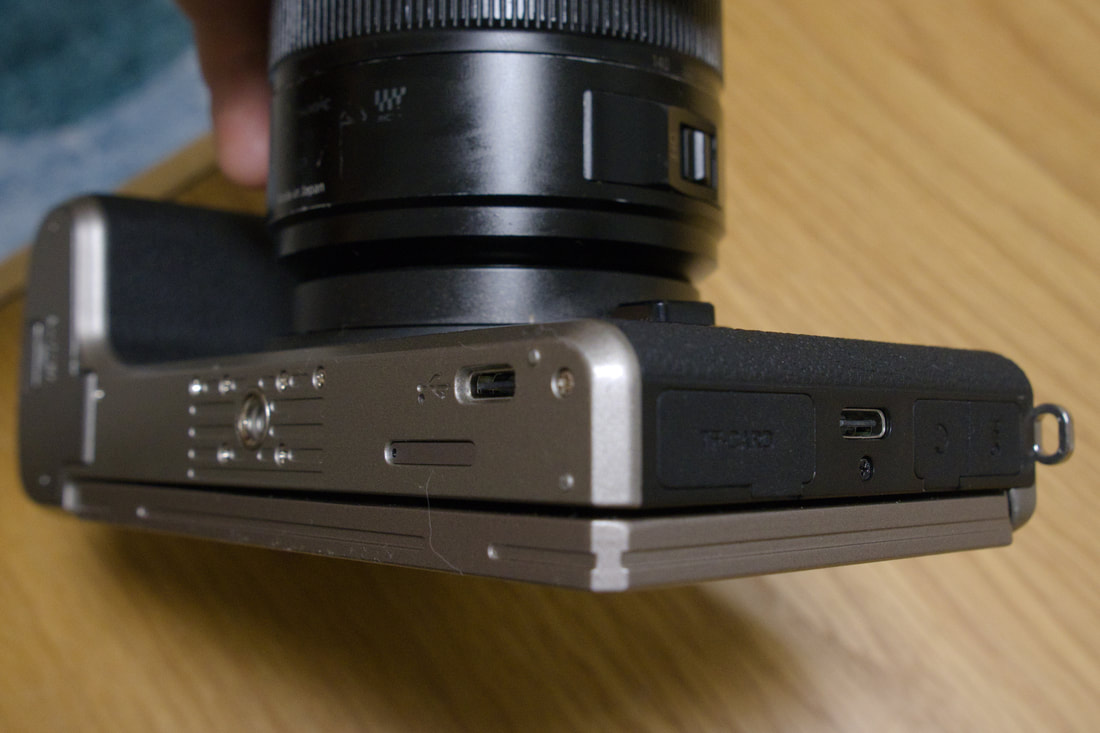 There are very few buttons: a power button, which operates similarly to smartphones in that a long press will power on the camera, and when already on, will bring up the side menu with some functions that Android users are used to (restart, power), but also other ones (deep sleep, screenshot). A short press will turn off the screen. Apart from the power button, there is only a shutter release button. The black disk on the top right that looks like a button is actually a rubber piece that covers a threaded mounting point on which you can attach the hotshoe that comes with the camera. This allows the hinge to be at the top of the camera while saving space for an accessory that few people might use.

The YN455 handles just like a smartphone, and I found myself holding it in portrait orientation most of the time... It must be said that the touchscreen is very responsive and that the operating system is no slouch either, as it is powered by a modern Snapdragon processor 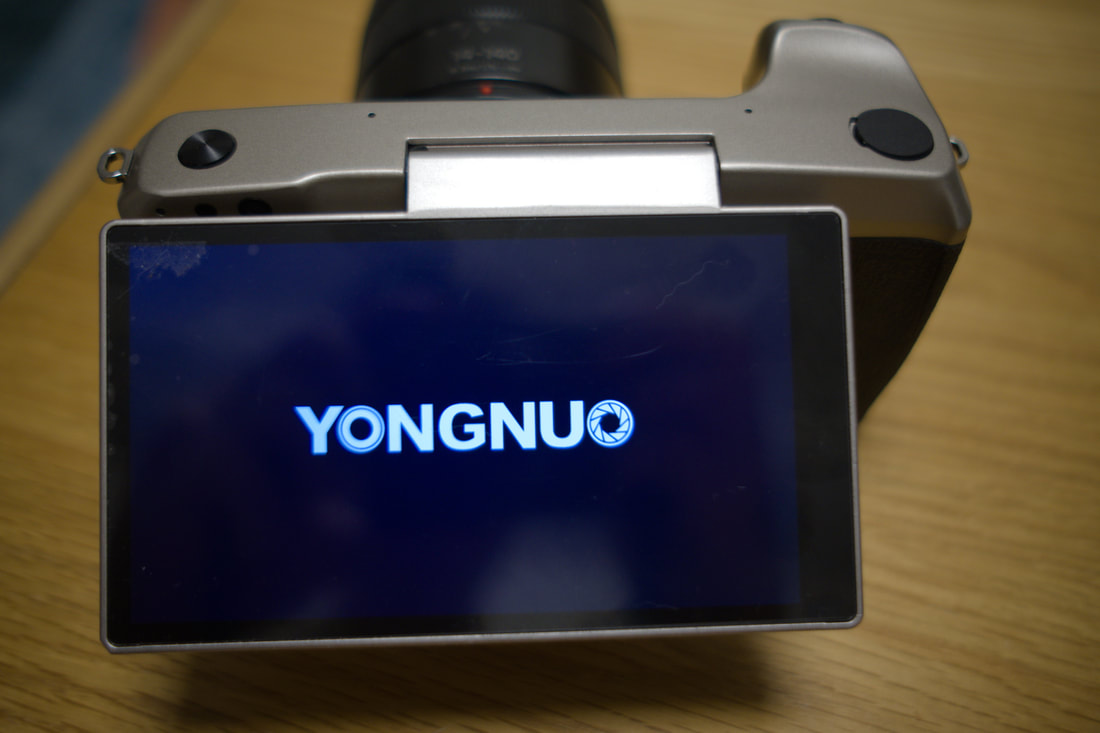 Luckily, ​I was able to change the language easily to English, and to then install applications using the pre-installed Google Play app (and a VPN, being in China). From then on, I downloaded multiple applications that I intended to use to exploit the potential of the camera as a computational photography workhorse. Interestingly, many Android camera apps seem to be useless re-brands of the free, excellent, and open-source Open Camera app, so I discarded the following apps that were of no use to me:
This left me with the following apps: ​I did not purchase any apps but would appreciate suggestions of excellent apps that I might have overlooked (check out the "about" page).

I had high hopes that there might be some kind of computational photography modes on the stock camera app. Unfortunately, even though it is well-implemented and nice to look at, the app only offers Manual, Aperture, Shutter, and Manual modes, as well as portrait, sports, and landscape scene modes. These scene modes, it appears, do little more than prioritizing some bias in the basic image capture settings (aperture, shutter speed, ISO).
​
Apart from this, there is a timer, face detection, flash control (the flash being a front-facing LED, just like with smartphones), and a very short list of settings. Several buttons, even though the operating system is in English, are still in Chinese or badly translated. However, it is worth noting that only the stock app was able to output the full resolution of the sensor (20MP instead of 16MP on Open Camera). 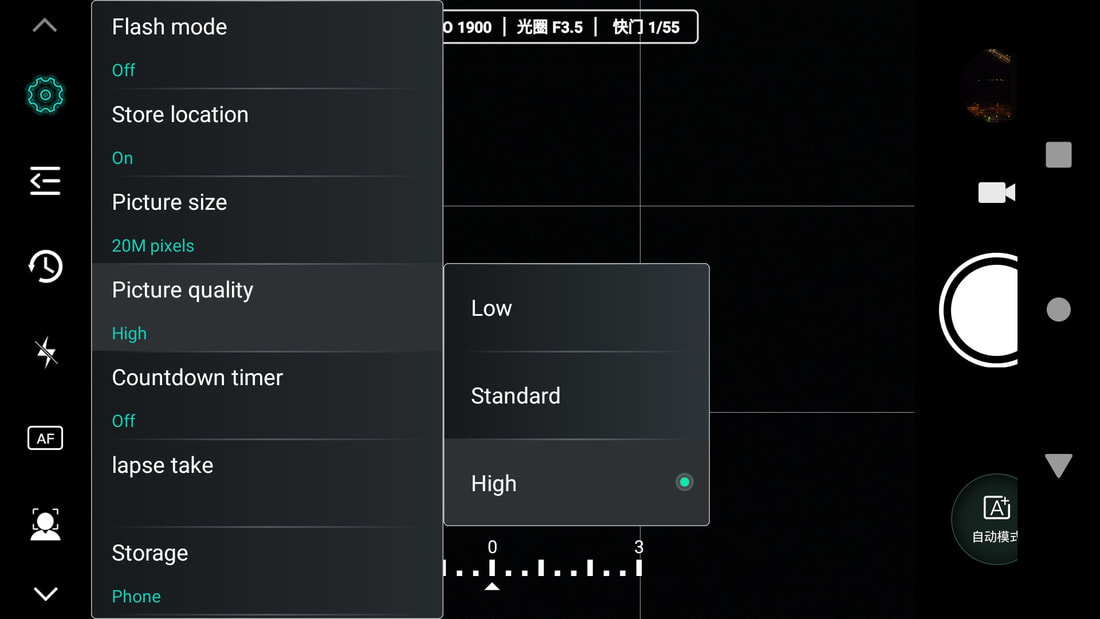 I bought a used 14-140mm Lumix zoom lens to test the camera, and although it had already experienced some external physical damage, it was internally flawless and so I speculate that the following problems were due to the camera.

After mounting the lens, it would always still not fit perfectly fit as it would wobble when I turn it clockwise or anti-clockwise. This is what led me to believe that the occasional complete lack of response after half-pressing the shutter release button was due to a mechanically imperfect match. However, I observed this only with the Yongnuo stock app and not with the other third-party apps, and restarting the app usually led to an audible reset of the lens focus which solved the problem. In a nutshell, I believe that occasionally, the lens will not focus when using the Yongnuo app.

Adding to this, the Panasonic lens, which uses a focus-by-wire design, does not focus manually at all on the YN455 when turning the focus ring, possibly because it requires a communication between the camera body and lens, which in this case seems not given? This could be tested with a lens that has a manual focus switch, as I am unsure whether such a lens would require to communicate with the camera body at all. Not a big problem when you buy Yongnuo's manual lenses as a kit with the camera, but still...

Furthermore, aperture control was not available, possibly because we are talking about a camera running a smartphone OS, which offers apps that usually control smartphone lenses with fixed apertures. Correspondingly, the EXIF tag for the F number says "1" all the time... Quite a disappointment, but again no problem if you use a manual lens. I have no idea whether any of the third-party apps will offer aperture control one day for such a niche product, but Yongnuo definitely should.

Luckily, the lens' image stabilization seems to work, but does not seem as effective as what I am used to from Panasonic lenses. Hard to tell without a proper comparison what led to that impression.

Bottom line: what's the point to make a M43 camera if you can only use manual focus and manual aperture lenses?

Image quality ​- good but no RAW

The image sensor is likely to be from Panasonic or Sony, and the image quality correspondingly fulfilled the expectations. Unfortunately, none of the apps I tried were able to save the raw image data from the sensor. Pictures were excellent. Open camera was able to save images as WebP, a more modern a likable image format than JPEG, but this is probably off-topic. 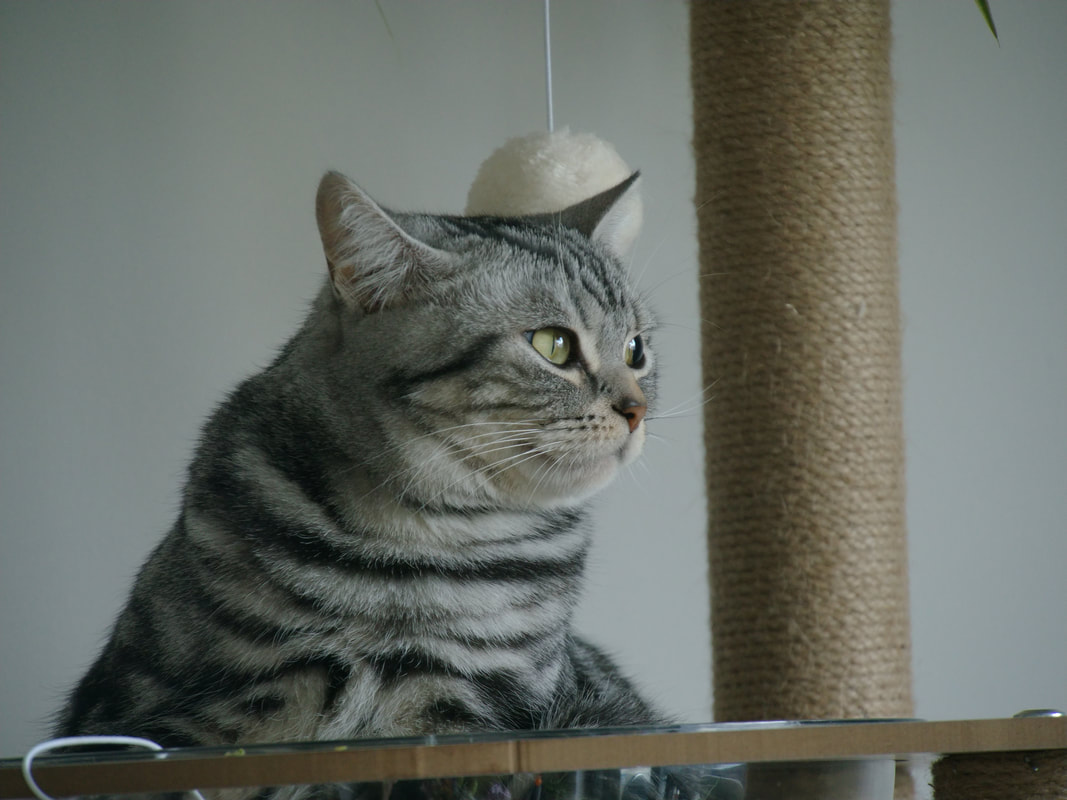 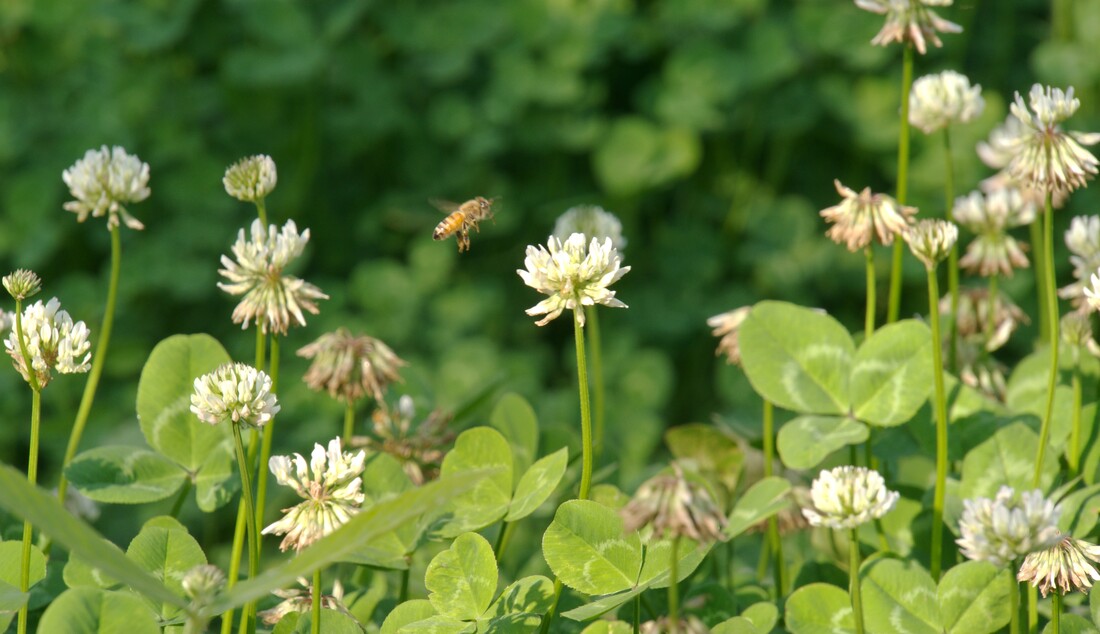 The following section should have been the main one. Unfortunately, much less was possible than I hoped.

It turned out that Open Camera was the only app that was able to do HDR photos. It succeeded in extending the dynamic range, but this being a free app, or maybe because of yet incomplete support for the imaging sensor, the tone mapping produced results with less punchy highlights and color shifts in shadows. I suppose that the HDR functionality that can almost be expected in any newer camera will produce better results. Again, it turned out that only Open Camera offered the possibility to blend multiple identically-exposed photos to average-out noise. This could have been handy if the camera did not try to re-adjust focus in-between the series of shots that are about to be blended, which, given the challenging low light focus conditions, led to shots with slightly-different focus planes and a blended result that had less noise but was less sharp than a correctly-focused, single shot. However, the dynamic range was successfully extended in the shadow regions where some objects became visible, but highlights seemed to get a boost past saturation too, losing some in the process as well (whether this is due to the inconsistent focusing I cannot tell). Finally, it was refreshing to see that ghosting seemed well controlled as moving subjects were frozen. Single, sharpest shot in the four-image sequence that was used to generate the noise-reduced composite image in Open Camera app. I hoped to use apps that vary focus as to construct a depth map of the scene, but Open Camera and Pixtica only offered some functions for enhancing portraits.

Open Camera offers the portrait scene mode and focus bracketing. Portrait mode is a scene mode and does little more than biasing the automatic aperture settings towards larger apertures (just like what the stock app does), which has an unnoticeable effect when you use a camera that cannot control the lens' aperture so that it will stay wide open anyway. Focus bracketing was disappointing because I expected it to work, since auto-focus did. Instead, even though I set up a range of focus distance from near to far that were over a few meters wide, focus bracketing took five images that were focused on exactly the same plane, making it impossible to even manually combine them in post.

What Pixtica did was to take a single shot, to then blur (with a slider that you can control) everything that was not recognized to be a face. This can lead to unwanted results with poorly controlled transitions between your subject and the background; not exactly what I had in mind: 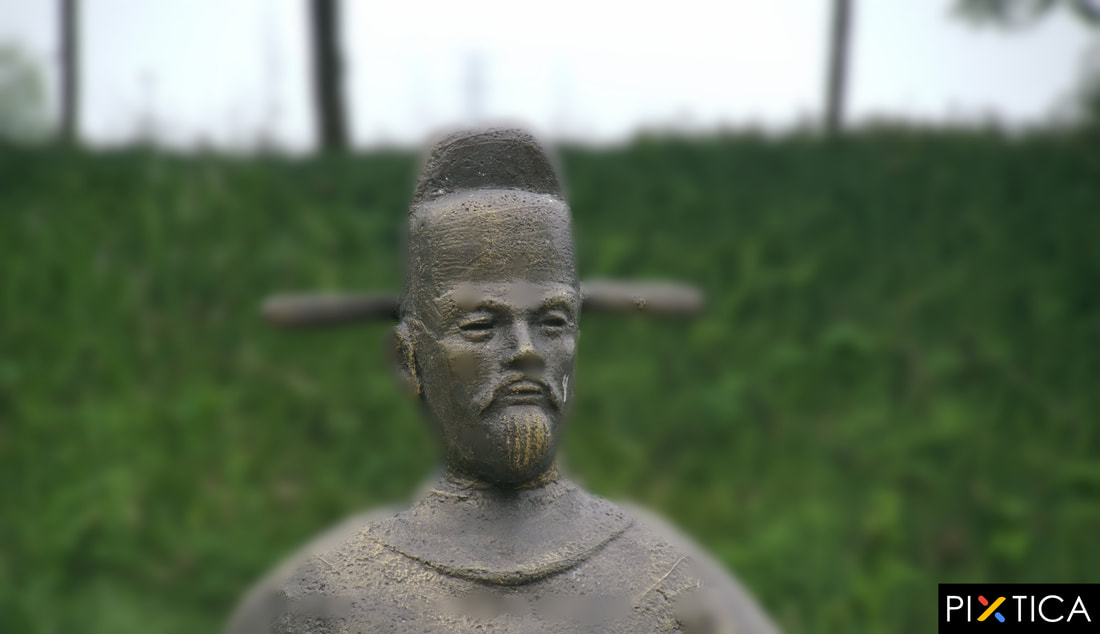 Yongnuo is brave and innovative, and they are certainly going in the right direction. However, they did not deliver what a photographer would have expected from such a camera. Even people who do not need computational photography would be disappointed with the current feature set of the camera. Then again, such potential customers would have few reasons to buy such a camera...

We can only hope that Yongnuo fixes as many shortcomings as possible with a new firmware (indeed, quite a few could be fixed) to get a product that is not only unique but also much more usable.
Thank you for reading, check out the "About" page if you have questions that I can address before re-selling this camera.